Impressions of a Pilgrimage

Home » Projects » Impressions of a Pilgrimage

A musical impressions of a pilgrim’s way to Santiago de Compostela. The score is available at Donemus Publishing: https://webshop.donemus.com/action/front/sheetmusic/13182 Order the CD “Impressions Of A Pilgrimage” For USA / Canada, please order here. Or listen on Bandcamp, ITunes, Spotify. 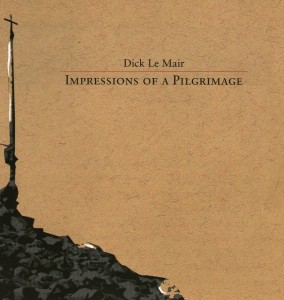 Making of „Impressions of a pilgrimage“

The story of the music ‘Impressions of a Pilgrimage’ began very simple. The recording company asked the composer ‘Do something with Gregorian music’. In that time friends told him about the pilgrimage to Santiago de Compostela. Impressed by their stories the idea of his own pilgrimage began to grow. But Dick Le Mair not only wanted to do a pilgrimage, he wanted to narrate the long way to Santiago musically. He decided to start his journey in January, a time when only few pilgrims are on the road. He really wanted to be alone to focus on his music. At the different stages Dick made some extraordinary experiences. Right in the middle of a field he found the Cruz de Hierro which is a destination for pilgrims for ages. At this cross they depose a stone as a symbol for their sins and mistakes. In a little village called O Cebreiro Dick visited a small chapel where he could worship The chalice of miracles. Centuries ago inside this chalice wine had been turned into blood while devine service. One could virtually feel the presence of hope and love in this oratory. At his destination in Santiago de Compostela the exhausted, but happy composer took a long rest in front of the cathedral. Right at this moment he got his musical concept:”Sitting at this great cathedral I heard the sound of the organ inside and everything fell into place. I became aware that this ancient organ should be the punch line, the great final. The percussion, the voices, the orchestra and all the melodies finally got their perfect shape.” Back in the Netherlands Dick Le Mair presented his idea to his Record Company at Rotterdam for which he already had produced an album. The manager was impressed and let the exceptional composer start his work. The sessions were phantastic. There were only little difficulties in recording the organ at Santiago. But in the end Dick turned out to be the first artist ever to record this vintage instrument for a CD production. One year later Dick Le Mair´s Impressions of a pilgrimage was released in the Netherlands.